Executive summary, what we did on vacation

What better time to reboot the blog than now; the global pandemic pause in our usually insanely busy lives. We’ve done so many things since last post that it’s impossible to cover adequately, but here’s a few great highlights in post 1. Then I’ll follow on in post 2 with our view of the new world we find ourselves in…spoiler: it will need decoration!

We stayed up all night transforming 2 large office floors with walls and pillar wraps:

Did a big wall wrap with dimensional elements:

Big rebranding at the YBCA:

Some very difficult constructions like 5 layers of frosted acrylic and another 5 layers of painted wood for a large entryway dimensional mural.

Or this giant glowing “A” logo with the floating part

Some really big shows featuring a little of everything from superwide fabric to windows, walls, posters and floor graphics:

But the biggest news was our expansion into grand format dye-sublimation fabric. In the past 3 years we’ve mastered the art and have produced miles of fabric for many of the biggest events and countless displays using SEG, pillow wrap and structure wrapping:

It’s been a great run. Will this be the end? Stay tuned!

Our team has spent over two months developing, producing and wrapping 16 electric vehicles for our long time client City Carshare.

These cars feature no less than 6 different designs and are turning heads!

We shot this footage and City Carshare turned it into this fantastic video:

His Honor, The Williehead. A 5ft tall paper mache effigy of the guy who put Critical Mass on the map.

Since I am big on bikes, mostly to get around in this crazy city without dying of road rage, it was not long before I glommed onto the Critical Mass rides way back in 1993 (when dying by riding these streets was a much more common problem). It was the most creative and positive event I’d ever seen. What a joy to ride in the safety of numbers and take back the street for that one afternoon each month!

We hosted a lot of gatherings here at the sign shop. Built a lot of signs and props, including my most famous construction; The WillieHead; an effigy of Willie Brown Jr. the little Napoleon mayor who catapulted Critical Mass into worldwide fame by uttering his famous taunt after having his limo get stuck waiting for the Mass to pass though a traffic light, “I won’t allow this lawlessness in My City”.

That throw-down ended badly for him, and cost the City millions in lawsuits when it became a clarion call for citizens all over the state to come in for the monthly ride he promised he would shut down…or at least make it heel, (apply for a permit, follow an approved route) simply to defend this fundamental right. The number of riders was ridiculous, that old “ain’t no power like the power of the people” chant became a real live force of nature.

It’s been 20 years since, I don’t ride very often anymore and though it was always a problem having the odd adolescent use the safety in numbers to act up, apparently it’s much more common now, which isn’t much fun to be a part of and fun was always the bottom line at Critical Mass.

I dug up one of my old websites dedicated to Critical Mass issues on the Wayback Machine, since this is a sign shop blog, I have to share: How to build your own Williehead.

I love seeing a room come together. We did lots of stuff at this conference:

Here’s some lettering for our own brochure. Both the setup and the final for print:

This time we simply sourced the changeable lettering for their existing marquee.  Lettering-r-us!
Cool photo from http://instagram.com/p/kaGGwtrnFk/, cool new San Francisco Landmark: http://centerfornewmusic.com/ The Center for New Music, cool things will be happening there!

We produced the props you see in these two spots, under the masterful direction of James Raymond and Dwane Platt. Check out the two 15 second Vimeos for sweet digitally printed cutouts that slide around and our first servo motor powered prop using Arduino. (Technical support by über geek and friend, Sean Brennan)

This is a simple pattern but was very carefully decided upon after many tests. It will be used on a set for a television commercial for a major computer provider. It is remarkable how much energy and attention to detail goes into these film projects. 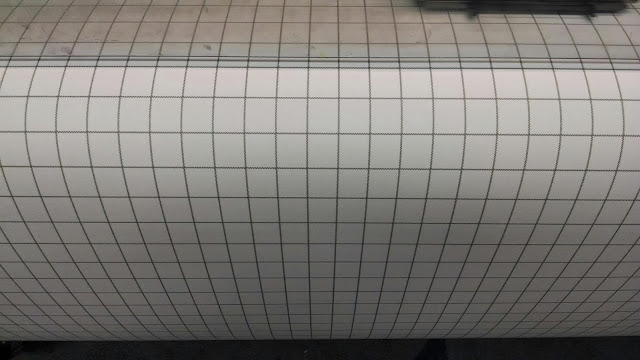 This is rolling off the press right now…and will be going on the wall of the library of the mansion in a couple days. 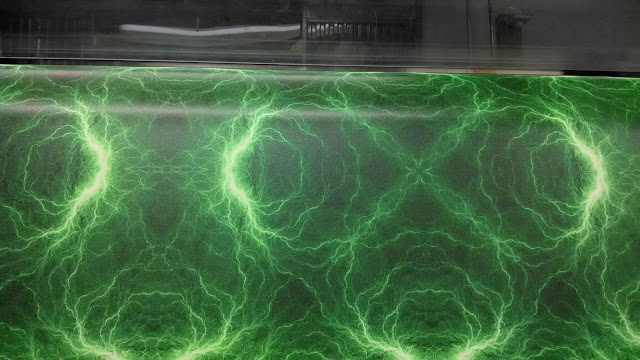